A Total Lack of Spider-Sense

Ever start researching to write one article and end up having to go in a different or multiple directions? That’s me and this article.

The movie version of Spider-Man is getting a reboot, after Sam Rami and Marvel couldn’t come to an agreement on the fourth installment of a rather popular franchise. (Spider-Man 3 hit the skids when Marvel insisted on the Venom character being forced in, although Rami is the one who decided the Sandman would be the same guy who killed Uncle Ben and Mary Jane would be cheating on Peter with Harry.) Personally, I think it’s a plot to break up Peter and MJ at every turn possible (fear the future of Spider-Girl’s parentage and someone protect the newspaper strip) but this surprisingly isn’t that rant.

Not when we have the possibility that Spidey will be an angst-ridden black kid. And I’m not joking on that one. 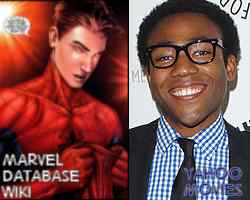 Yeah, I totally see the resemblance.

Let’s start with the story I was planning to write. Among the Twitterites there is a move afoot to have actor Donald Glover take on the role of Spider-Man. Glover isn’t the dark haired white kid that Peter is. This would seem to be just fine with i09.com contributor Marc Bernardin. In a recent article, Bernardin suggests that it’s “about time” that a black kid take on the role of Peter Parker.

In this day and age, why does Spidey have to be a white guy?

Yes, I know: “Because that’s how Stan Lee and Steve Ditko created him.” There is no worse argument for anything than, “because that’s the way it’s always been.” Lee and Ditko created a wonderfully strong character, one full of complexity and depth, who happens to be white. In no way is Peter Parker defined by his whiteness in the same way that too many black characters are defined by their blackness. He’s defined by the people he cares for, by his career, by his identity as a New Yorker (incidentally, one of the most diverse cities in the world) — as too many good people died to prove, a man is defined by his choices, not by the color of his skin.

And yet, that’s how your looking at him, as a white boy who couldn’t possibly be a positive influence on a black kid. Because skin color is everything in this world, just like hair color and eye color define who we are and not because God just happened to grab a different crayon out of the box that day. However, I’ll stop here because this isn’t a race war rant. It’s about Hollywood screwing up the source material to fit their own narritive, which might as well not even bare the name of the source material.

So why couldn’t Peter Parker be played by a black or a Hispanic actor? How does that invalidate who Peter Parker is? I’m not saying that the producers need to force the issue; that they need to cast a minority just for the sake of it — but in the face of such underwhelming options like Billy Elliot and the kid who played young Voldemort, why not broaden the search? It’s not like any of these blokes are lighting the world on fire like a young Johnny Depp or Leonardo DiCaprio.

I’ll get to the actors they’re looking to cast in a moment, that’s the deviation I was talking about in the intro. However “I’m not saying that the producers need…to cast a minority just for the sake of it”? Uh, yeah, you kind of are. What’s the title of your article?

“The last thing Spider-Man should be is another white guy“.

And don’t tell me it’s because an actor of color would hurt the box office: Not only is Spider-Man one of the most recognizable fictional characters on the planet, and managed to do just fine with Tobey “Snoozeville” Maguire playing him, whoever they cast WILL BE IN A MASK FOR HALF THE DAMNED MOVIE. AND ON THE POSTER.

Will the real Nick Fury please stand up?

Are you sure you write for a sci-fi site? Your talking about a community who threw a fit over organic webshooters, and you don’t think they’re going to notice a pallet swap? Colorists have been savaged in comic reviews for things like that. Someone like Nick Fury, a grizzled, white WW2 vet, goes under the radar because anyone who went into Iron Man that knew who Fury was outside of a TV movie with David Hasselhoff (if they even know about that), already showed any problems they had with it when the Ultimate comics decided to make him look like Avery Brooks from Star Trek: Deep Space Nine or Spencer For Hire. They would have noticed if Blade the Vampire Hunter had been played by Antonio Banderas or Wil Weaton rather than Wesley Snipes, I promise you. They notice that Jubilee isn’t draw all that Asian as of late.

How will that affect movie sales? Couldn’t say, but if Superman Returns is an indicator, mess too much with a franchise and things won’t bode well. They got upset when the comic Iron Man dropped the gold in his armor for silver (although the dubbed “Silver Centurion” armor has its fans). Getting back to Nick, changing his skin color did in fact change the way the character was portrayed. Look at the original version’s appearances prior to the movies and Iron Man: Armored Adventures going the Ultimate route. His entire origin story is altered, which should impact the character and his portrayal, if the people making it have any sense. We’re defined by our life experiences, and that will affect the character.

Green and Purple. Why was that a good idea?

Besides, if your really need a young “African-American” superhero (I really hate this hypen nonsense), you have plenty to choose from without pulling a Battlestar Galactica on us. (Notice the lack of black people in the reboot, but Starbuck and Boomer are turned into women–despite there being plenty of decent female characters in the show, one of whom was also black? Go back to the early Saturday Night Showcase articles, when it was still “Saturday Night Galactica” for a refresher course.) Why not use the Prowler? His origin is similar enough to Peter’s, only he actually built his own suit? The reason Steel failed wasn’t because Superman was taken out of his origin but because it was written like a Sci-Fi/Syfy Channel movie. He even appeared in the 90’s animated series, with a different origin that would still make for a good movie. (I would have linked to the episode, but Marvel.com doesn’t have it up just quite yet as of this writing. Also, their video hosting section design is crap.)

Bonus points: Gear's dad is a recovering racist in the show. That has to make Hollywood writers happy. They love racist white guys in black hero stories.

Or what about Static? Use the cartoon version and you have a white kid sidekick and plenty of minorites among the heroes and villains (although there were more villains, because most of the folks hit with the Bang Baby Gas were gang members involved in a rumble at the time). Use the comic book and you even some of the angst that director Marc Webb wants.

Which leads to the other issue. The Hollywood Reporter has an article where the current top 5 possibilities have been listed. I haven’t heard of any of the nominees, but who cares? Why not give an unnamed actor who can play the character the chance? It could make their career and wouldn’t involve as much being sucked out of the budget needed for special effects. Granted, the two guys picture there doesn’t scream Peter Parker any more than Glover does, and I’m one of the few people who thought Tobey looked the part. You have to be an Osborn to have a tougher hairdo to pull of in the real world. However….

The group of actors seems to fall in line with what Webb has been looking to do with his take on Spider-Man, which is to cast relative unknowns in a story that roots Parker back in high school. The movie will be an angst-ridden tale of a teen dealing with the knowledge that his uncle died even though he had the power to stop it.

What? “Angst-ridden”? Does that mean even less of the famous Spidey one-liners than Tobey Maguire was given? Forget the current list, who starred in Twilight? Look, Spider-Man isn’t Batman. BATMAN is Batman. Why the hell does every superhero have to be Batman these days? Even comic characters who aren’t in the Bat group are going Batman. Go read Spider-Man & Batman a crossover that showed why Peter didn’t become as angsty as Bruce Wayne. The only thing stupider would be a darker Superman, and we’ve heard rumors of that being a possibility.

I’m starting to wonder if the upcoming cartoon and video game are going to be as good as their predecessors. Spectacular Spider-Man and Web of Shadows may not fit current movie, or comic, mentalities.