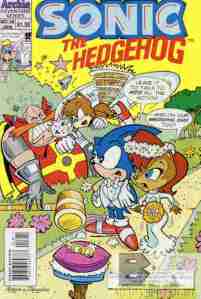 Because we all know comic book weddings are always happy affairs…when compared to Game Of Thrones.

Princess Sally’s Crusade part 2: “In The Still Of The Night”

In the main story, Robotnik learns that Sonic and Sally are going to have a wedding at a barn outside of Robotropolis. So he decided to send an invasion force to break up the wedding and capture the Freedom Fighters…except that it turns out to just be a play they’re putting on. This is from the time when the comic was a mix of ABC’s Sonic The Hedgehog in concept and syndication’s Adventures Of Sonic The Hedgehog in tone. (Coconuts even makes a cameo alongside the SWAT Bots.) It’s honestly not a style that works for me personally but the story is fun. Sadly it doesn’t involve Tails actually cold cocking Robotnik like on the cover.

The back-up has Sally’s mentor Julayla on her death bed. She and Sally reminise but there’s one more test Sally must learn from her, and finally snatch the acorn from Julayla’s hand. Sally thinks outside the box which is proof of passing the last test and Julayla passes away. Sonic comfort’s Sally as the story continues in “In Your Face” special. The only thing that really makes this feel like a “part 2” is Rotor learning that an orb they I’m guessing found in part 1 is actually a force field holding something inside. However, it does feel closer to the SatAM version the characters and concept come from.

Overall, it was an okay comic but given what’s happened to the Archie run thanks to stuff we’ll be discussing tonight I have a hard time connecting to it. Also I was never into the syndicated Sonic cartoon but loved the ABC show, so the merger never really works for me either.