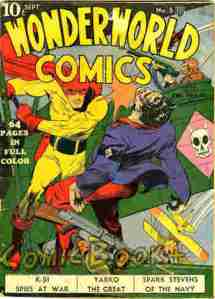 Not the strangest thing the Flame has done, mind you.

Fun fact about this issue (read along): apparently this is one of a series of comics from the collection of Golden Age comic collector Jim Vadeboncoeur, Jr. that he has allowed scanners to come and scan for Comic Book Plus and the Digital Comics Museum. The JVJ Archive appears to be massive, and CB+ alone has over four thousand comics when last checked, possibly over 42,000 depending on what part of the page you’re looking at. That’s a lot of comic books. They’re also very well read, and you can tell by the condition of the pages in the scans. I thought some of my older comics were in bad shape, it has nothing on this issue. Some of the pages don’t even look like they came from a together comic book. I think sometimes they use the Grand Comic Database for covers (they don’t do the watermark thing like I do to give credit) and that has to be the case here. This cover is in much better shape than the comic.

Frankly I wish either site also had a listing by publishing date. For example, looking up all the Fox Features comics that came out in September, 1939. At best I can look up all the comics from all the publishers that month but right now I want to keep to the Fox Features titles, especially their superhero stuff, though this anthology is a mix of superheroes and other action genres. I started this to look up Blue Beetle, so would you rather see me finish this series first or move over to rookie patrolman Dan Garrett, which I’ll still get to eventually. Let me know in the comments, but now it’s on to this week’s review of this comic.

The Flame: “The Construction Crooks: “WRITER/ARTIST: Basil Berold, though CB+, who also comes up with most of the story titles so they may not be official, credits the writing to Wil Eisner and art to Lou Fine. Who knows, anymore?

A building construction company is using shoddy materials and their buildings are collapsing. Thanks to crooked politicians support them, they can’t be arrested. So the Flame roughs them up and then leaves instead of doing much of anything. So the two baddies call a hitman and his buddies to snag him, which he finds out about and tries to listen in on their meeting. They eventually overwhelm him because he’s lousy at being noticed even hiding his costume and bring him to the next building due to collapse. The Flame manages to escape and they’re caught in their own trap and killed. It’s serviceable but possibly due to the page limit there’s not really time to do anything beyond be a plot rather than a full-on story.

Yarko The Great: “Vladim the Voodoo Master”: The credit is given to Anthony Brooks but CB+ says it’s a pen name for Toni Blum and the art was done by Bob Powell…they think. They may be good at coming up with titles but not very good at confirming their credits sometimes.

Yarko just happens to be driving by a castle where a man is trying, and failing, to escape the evil Vladim, who apparently isn’t just into voodoo, which we rarely see him use, but mutating people. Yarko manages to stop him, a girl is in there just for eye candy because all she does is let Yarko free her from a fire-filled room and drive off, and I don’t even know why voodoo was brought into this. Just have him using evil magic to make slaves. We see one voodoo doll of the girl and it never really comes into play. Outside of Yarko doing more magic stuff there’s nothing to this story, and I swear the only reason he doesn’t use the same trick twice is to show off. This is also the last story CB+ even tried to give a title to.

Even this story doesn’t have much happening in it, and it’s the serialized tale. Shorty, Suzie, and Woofy eventually befriend Mr. Mizzen. The baddies new trick is throwing knives at the kid but between Mizzen’s strength and Shorty’s post they manage to break them all. Mizzen forces the goons to promise to leave the kids alone. At least this was a fun installment and it is a story continuing through the books rather than the done-in-one tales of the rest of the book but it seems thus far the whole book is going to be a whole lot of very little.

Patty gets suspicious when she and Ham aren’t allowed to film the salvage operation by the boat they’re on…which is when she finally realizes they’re foreigners. However, the only part of the cargo they’re after are some papers for the State Department. So…why did they let a film crew aboard in the first place? Allowing them to film wouldn’t have been a problem since they would already be away with it before the movie reel could be developed and edited. This isn’t like today with instant recording. Also, Ham can kill a shark so fast I didn’t even know he had a knife. This is a story with a lot of questions.

Dr. Fung: WRITER/ARTIST: Bob Powell if you ask CB+, Arthur Dean according to the title panel

For once Fung and Dan don’t stumble onto a mystery, they’re actually asked to find a man’s missing daughter…whose plane went into the jungle when she was a child and now she’s an adult living among ape-men. It seems to be an excuse to have Dan fight ape-men really. The girl seems to be happy to boss them around as she seems to be the leader’s girl but she’s rescued, told about her father, and suddenly she’s ready to go home and kissing Dan on the cheek. Forget the story, what is even with this issue?

Continuing the trend of either not being much of a story or raising too many questions, Tex gives us the latter. For example, why do cattle rustlers want a cattle rancher to raise his prices and join their gang? At any rate Tex and his sidekick defeat each of their plans. The action would be fine if the bad guys weren’t kind of dopes.

Another tale more plot that story. K-51 is assigned to protect a visiting king and queen from spies not happy with the king’s denouncement of dictators. There’s only room for a couple of plots, and K-51 actually gets hurt but it just ends up being a bunch of action pieces.

Our action DA does it again. Another mobster tries to take him out, he tracks them down, beats them up when they try to smuggle diamonds….and then blows up their ship, possibly killing them all. You could make a low-budget 80s action movie with this guy.

Taking up the rear again are our favorite bickering Navy radio men. Once again, Spark and Chuck follow a pretty girl and get into trouble, this time with illegal alcohol sales to Hawaiian natives. Why is that illegal? Your guess is as good as mine, but somebody found all the alcoholics. Also the native girl looks more white than Hawaiian. We also have another shark getting gutted by the heroes, but this time we get to see the knife… and our heroes convince the natives to feed the booze salesman to the volcano god. And of course they’re too busy fighting to get the girl. This story is quickly becoming a one-trick pony.

This was not a good issue overall. It wasn’t bad necessarily, just kind of bland. The stories are just action pieces without story, not even attempting by Golden Age standards to be more than that. I’m just not that impressed with this one.