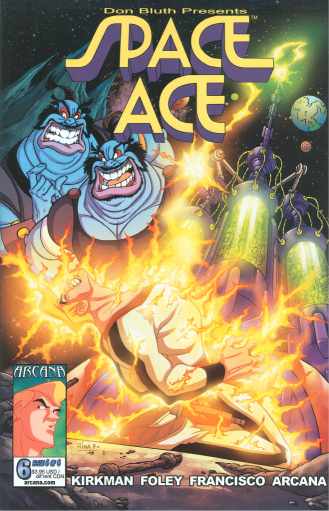 This is why DYI electrolosis is a bad idea.

Space Ace and Kimberly have their final showdown with Borf and Gorf, which results in the Matter Divider exploding and splitting Ace into his three age forms. With the extra help on hand, our heroes defeat the brothers, and Ace and Kimberly are wed.

What they got right: The mini-series ends with a bang and a happy ending. I like that. I also like some of the cameos at the wedding, some of which were born out of this title’s original publisher, Crossgen, and MV Creations, which only published the first three issues. It took me years to finally learn how the story ended and it was worth the wait.

What they got wrong: I had way too much trouble telling Borf and Gorf apart. I think some of the word bubbles being mixed up just added to the confusion. (One is even missing when Borf (?) is punching Ace.) Maybe if the cape didn’t keep disappearing or they had more distinct hairstyles I wouldn’t have had any problem.

Recommendation: If you liked the game, then this should be a good comic to get. If you missed it this time around, keep an eye out for the trade.

As a sort of bonus to this scene, there are at least two cameos I can identify. 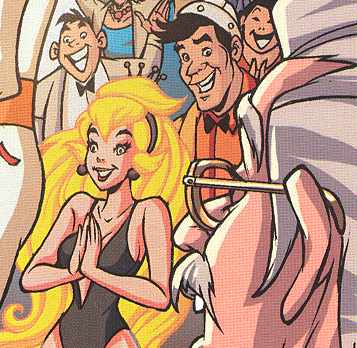 The first are Dirk the Daring and Princess Daphne from Dragon’s Lair, the other Don Bluth cartoon video game.

The other are Orko (who also shows up in the next panel) and Dree-Elle from Masters of the Universe. Oddly, Dree-Elle is wearing different colors than she wore on the classic series (odder still that she was never in the remake that MV Creations based their comic on) and in this panel Orko has weird colored eyes.

Up next: Best Scene of the Week in the Weekly Wrap-up with Jake & Leon, then on Monday, Billy Batson and the Magic of Shazam #13.