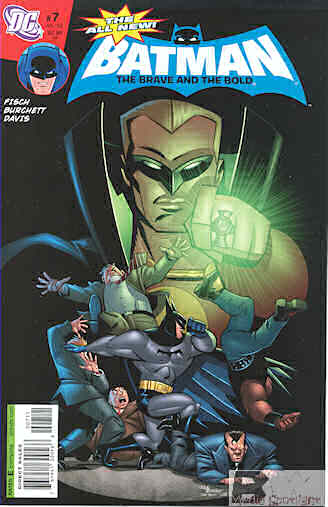 To whomever writes the credits in comics: you don’t have to list the cover artists if they’re the exact same people WHO DREW THE REST OF THE COMIC!

After the Teen Titans rescue the Justice League (who are turned into babies by the Time Trapper), Batman remember back to his early years as a crimefighter. His methods earn him negative attention from the original Green Lantern (Alan Scott) until they team up to rescue a kidnapped girl.

What they got right: I like this story on concept alone, an early tale of the Batman and seeing the original Green Lantern in action. This is also some of the best art I’ve seen, and the Bat costume here is my favorite so it’s nice to see it in action.

What they got wrong: In the show, Dick didn’t co-found the Teen Titans until he adopted the Nightwing identity. Forget what happened in DC continuity when you’re doing the comic adaptation of the show! This is a constant complaint I have had with DC’s animation spin-off comics. Also, I can see fans of the darker Batman being upset at what appears to be an anti-dark Batman commentary. Personally, I prefer that one Bat Mite episode that proved Batman can be interpreted numerous ways.

Recommendation: Overall I enjoyed the comic and very much recommend it. However, Fisch needs to do his homework on the show and get Dick into the Nightwing costume, not the Robin costume.

I don't know what's better: Batman looking awesome, the cute expression on the little girl's face, or the baddie that looks like he's soiled himself.