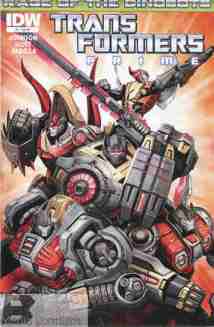 Transformers Prime: Rage of the Dinobots #1

As the Autobots evacuate Cybertron, the Dinobots–Grimlock, Slug, Snarl, Sludge, and Swoop–are protecting Autobots on the ground. However, Ultra Magnus’ ship crashes, which will soon lead to a confrontation between the Dinos and Ser-Ket, an agent of Shockwave’s.

What they got right: The artwork is just fantastic. The artist and colorist do a great job of translating the 3-D characters of the Cybertron games and Transformers Prime to the 2-D form. You get a brief look at each of the Dinobot’s individual personalities and they’re given functions within the group beyond “smash stuff”. Snarl is the medic and engineer and he doesn’t like being a Dinobot, which is not how they were designed. Slug (changed from “Slag”; I’m assuming because it means I think “slut” in the UK) still has anger issues but his function is “combat tactics”. Sludge is the logistics expert and probably the smartest fighter. Swoop, my favorite Dinobot in other continuities, is the scout and seems to love his job.

The best, however, is Grimlock. In other continuities he’s either rock stupid or practically a Decepticon who may only be an Autobot because he has issues with Megatron. Here though he understands he’s an Autobot and despite issues with Ultra Magnus he’s willing to rescue him simply because Autobots help their own. He stands out as probably my favorite iteration of Grimlock ever. I wish more Grimlocks were written like this and we know little about him other than if he’s fighting too long in T-Rex mode he goes berserk.

What they got wrong: While this takes nothing away from the story, how do they know what dinosaurs are? Has Shockwave been to Earth before in this continuity? Possibly. I haven’t played Fall Of Cybertron, or had time to finish War For Cybertron (and my recent Windows reinstall may mean I have to start from the beginning). However, the NAME “dinosaur” shouldn’t exist yet.

Recommendation: There’s finally an IDW Transformers title I’m looking forward to. You should really check this comic out. 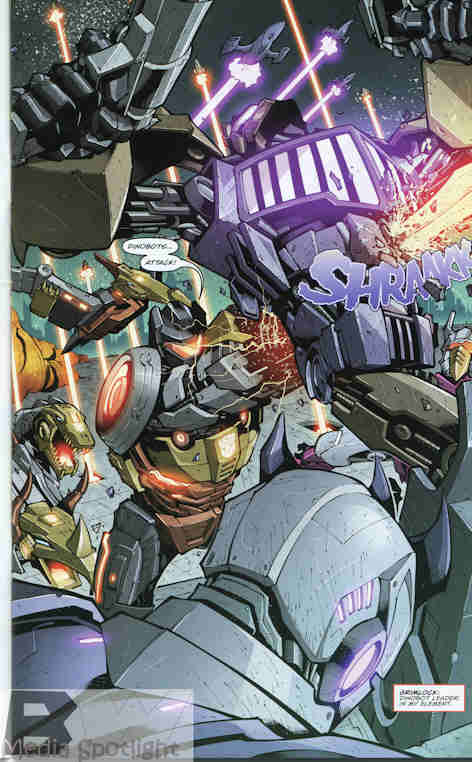 Grimlock had the same massage training as Boxer.