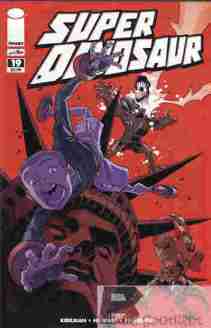 “This is not how I wanted to see New York!”

SD and Derek take on Tyrannosaurus X and while the latter is doing most of the whooping, everybody’s getting schooled. Meanwhile, things don’t look good for Derek’s mom.

What they got right: A humbled villain who is going to rethink his entire operation? Can that last? This is also some development for Super Dinosaur, who not only has to deal with the first loss we’ve seen but losing bad. For once, our heroes went up against something that their usual tactics was useless on and they only escaped thanks to dumb luck. Where this takes the guys should be interesting.

What they got wrong: Not leaving me a Best Scene nomination. Every sequence needs the other and there are so many good shots (admittedly mostly against SD) that I couldn’t choose just one.

Recommendation: If you haven’t picked up this series yet and want to know what it’s all about, pick up this issue. Actually, pick up this issue anyway. It has dinosaur people beating each other up all over New York. How can you refuse that?