I already teased what this week’s fight was going to be. And in light of…current events…let’s remember when Dum Dum Dugan was awesome enough to fight Godzilla man to monster and forget the…recent destruction of him as a character, shall we?

If you missed this week’s review or last week’s Fight, Godzilla has been hit with shrinking gas. At this point it’s worn off to the point that he’s human sized. And since this is a Marvel comic, misunderstandings arise, leading to…

On the other hand, shouldn’t that be both red hot and radioactive?

Meanwhile, little Rob continues to want to convince everyone to love Godzilla like he does. Which if you know Rob, is kind of creepy.

So who wants to see the coolest Dum Dum Dugan will ever be?

How many people can say they punched Godzilla in the face? How many?

Dum Dum then has to stop Godzilla from shoving Gabe into the river. It’s a river in New York so you know how important this rescue is.

To borrow from another Japanese character: Dugan…KICK! 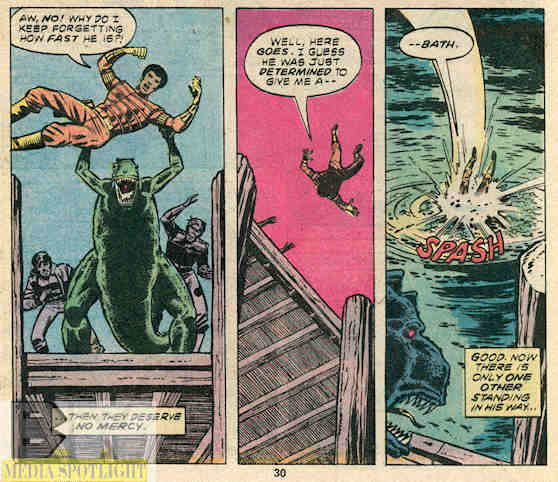 And a goodbye to Dum Dum as well. 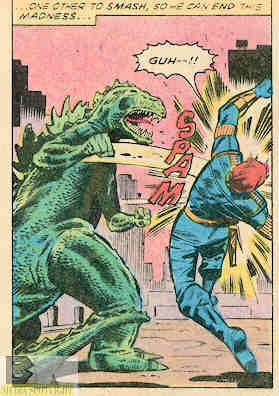 Godzilla learned to punch. Dum Dum is a good teacher.

Godzilla winning this fight was a given, but Dum Dum punched and dropkicked Godzilla and only got a few bruises for his trouble. That’s how you know they’re friends.

Head to Spacebooger.com by Sunday night and vote for your favorite Friday Night Fight! (Forum membership is NOT required to vote, only to comment.) Winners of these 12 rounds head to the Prize Fight, so feel free to join in. We could use the competition.