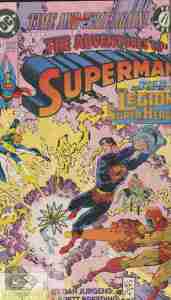 The Adventures Of Superman #477

[continued from Superman #54] Superman now turns up in the time period of the Legion Of Super-Heroes again, but later than before. The Linear Man watches, hoping to push him back to 1991, but his efforts are messed up by a new Sun Eater having its namesake dinner. Legionnaires Ultra Boy, Lightning Lad, Shrinking Violet, Wildfire, and Phantom Girl respond to the situation, losing the bomb that’s capable of destroying the Sun Eater. Superman finds himself on a dead world but does manage to find a spaceship and meets up with the Legion. Together the group manages to come up with an alternate plan to destroy the Sun Eater, but another explosion sends Superman back into the timestream, since just having him use the Legion’s time machine would have been too easy for this story arc. [continues in Action Comics #664]

What they got right: I do like seeing how the heroes come up with an alternate plan for destroying the Sun Eater. Not knowing anything about the creatures or what the Legion comics were doing with it that’s all I can comment on.

What they got wrong: Nobody cares about Bibbo getting drunk, Perry’s marital problems, or Jimmy’s mom ruining his date. Stick to the important parts of the story!

Recommendation: A good story on it’s own even if it seems to add little to the storyline. Worth checking out though.