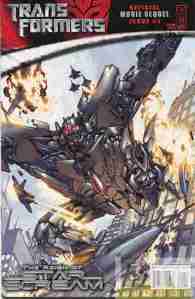 “I want a refund on this mosquito repellent!”

Transformers: The Reign Of Starscream #1

When the All-Spark was first launched into space Megatron went right after it, leaving the Decepticons to battle the Autobots without him. Realizing Optimus’ miscalculation in judgement, he and a group of Autobots go after the All-Spark themselves, Starscream and a select group of Decepticons following. Though delayed they soon showed up on Earth, leading to the events of the prequel comic and the first movie. Recounted from Starscream’s perspective, he finds a barely functional Barricade, who tells him Frenzy has Sector 7’s files, which may include information about the All-Spark. So Starscream heads to the dam to collect him.

What they got right: The movies really don’t do much with Starscream, so I like that the comic focuses on him as his struggles maintaining the Decepticon cause in light of Megatron’s obsession with the All-Spark. At least in the narration he even calls out Megatron and Optimus on their failings.

Recommendation: The first issue is fair at best, more set-up for the miniseries than anything else. This might be due to recounting the movie but it’s only worth getting if the rest of the miniseries makes up for it.