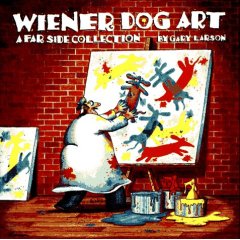 Cover to one of the Far Side collections, (image source: Wikipedia via Amazon)

The Far Side was a fun and often silly comic strip that ran until 1995 and in some papers lived on in reprints as well as collected into trades. According to one report it may be possible that Gary Larson is returning to his strip as a web comic. Since the article doesn’t actually link to the site, allow me.

Posted by ShadowWing Tronix on September 19, 2019 in Comic Spotlight and tagged comic strip, Gary Larson, newspaper strip, The Far Side.