No Liefeld, this time. It’s back to the old logo.

This is actually a crosspost from The Clutter Reports, as we continue to examine my love of serials.

I’ve mentioned before my love of movie serials, when I reviewed The Adventures of Captain Marvel. I’ve been trying to build up my serial library, and of course that would include other superheroes. Batman’s first appearance on the big screen was in the 1940’s, in a 15-part movie serial that also doubled as war propaganda. This lead to a number of changes, but that’s no surprise these days, when plenty of adaptations change things for their own needs. The question is how well the end product is.

Plot: Millionaire Playboy Bruce Wayne and his youthful ward, Dick Grayson, seem like average but lazy citizens of Gotham City. In fact, they are the Batman and Robin, two of Uncle Sam’s most important crimefighters, who help root out Axis spies on US shores. Bruce’s girlfriend, Linda, becomes drawn into one of those rings when Japanese mad scientist Dr. Tito Daka captures her uncle as part of a plot to cripple US war efforts so that Japan will win the war. The dynamic duo are aided by their loyal but cautious butler, Alfred, while Daka has convinced American criminals to aid him in his mission.

"What are we doing tonight, Batman?" "Hunting down Joel Schumacher!"

Analysis: I read that a few reviews were down on this serial, but frankly I rather enjoyed it. Most of the cliffhangers are well done (with a few exceptions), both in execution (pardon the expression) at the end of the chapter and the resolution in the beginning of the next chapter. While the “here’s a few seconds we didn’t show you” routine is used, other times require Robin to rescue Batman or a case of dumb luck (the latter a risk that doesn’t always pan out, even here).

The costumes are about as good as you can get for the time. Batman’s “ears” and cowl could have looked worse, but it could have looked better as well. Robin’s works. The actors who play the heroes carry the double identity well enough, but I’ve seen better.

We should, of course, address the anti-Japanese elements of the movie as part of the changes. The serial was designed in part to booster support of the war against the Japanese, so for its time some slack should be given. Today we get along fine with Japan and there’s a strong fanbase for their media. Back then, however, Japan had a more militaristic government and attacked us first. (All I’ll say about Hiroshima and Nagasaki, however is that I couldn’t have made that call.) 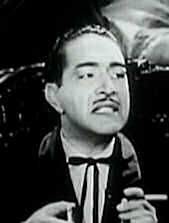 Still, right in episode one it celebrates the rounding up of Asians into camps under the concern that they may be “Jap spies”, with Little Tokyo now turned into an “anti-Jap” tourist attraction. (Which makes it a good hideout for Daka, even if his first name is more Mexican than Japanese.) Also, having a white guy playing a Japanese villain makes us uncomfortable today (see also every Charlie Chan movie ever) but it made sense back in the day. I’m not condoning or rejecting it, mind you, just stating the mind-set and letting you judge. Personally, the fact that they left this unedited in the DVD I have to give them credit for in these more PC times (the DVD was released in 2005 to capitalize on the release of Batman Begins–even the cover art resembles the poster and DVD cover of Christopher Nolan’s movie), although adding a special feature to discuss the attitude of the day might have been a good idea.

The serial actually had an effect on Batman’s portrayal in the comics. For example, Alfred used to be overweight, but after Austin’s performance he would apparently go on a diet and grow a mustache. It wouldn’t be until years later that Alfred would be a master of disguise and former British agent, so it’s no surprise that Alfred here is less interested about getting into the action. The serial also introduced the Batcave and the secret entrance behind the grandfather clock, both of which are part of the mythos today. (The comic even states that opening the entrance requires moving the hands of the “broken” clock to the very time Bruce’s parents died.)

Other changes, however, were unique to the serial: Due to budget issues, a normal limo, often driven by Alfred, was used in place of the Batmobile. The famous utility belts are worn, but are never used; they seem to be there just to match the comics. Instead of being vigilantes, the censors insisted they should be secret agents for the government, and coded messages are often sent to the heroes for their next assignment. They don’t really affect the quality of the work but do offer an interesting take on Batman and Robin.

The only thing I wish it had was a retrospective for reasons I stated before. I notice none of my movie serial DVDs (currently three) have any special features outside of captions. This serial isn’t even remastered, although outside of some film grain and the occasional white out it’s still decent quality. It’s a disappointment nonetheless.

The serial was successful enough to create a follow-up in 1949, which I’ll look at in a future report. For this one, I rather enjoyed it and if you can look past the propaganda (Daka follows the line of other serial mad scientists otherwise) it is a least worth a look for fans of Batman, movie serials, or old war propaganda pieces.

Just an added note: I plan to review the second serial for The Clutter Reports this weekend.