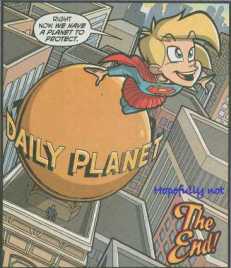 BW Fave Landry Walker did a guest appearance this week on the podcast War Rocket Ajax. Hosts Chris Sims and Matt Wilson start off talking about how fun it is to do the Bane voice from Batman: The Dark Night Returns and review a few new comics. Then comes the Landry interview, with rather dark ending planned for BW’s beloved Cosmic Supergirl (which doesn’t stop me from wanting this comic made) and the rest of her high-school years, a discussion about his previous works, as well as his current project, Danger Club. (Also we learn he doesn’t hate me, but that was intended to be a joke because Landry follows my Twitter feed. I didn’t expect it to actually appear on the show. 😀 )