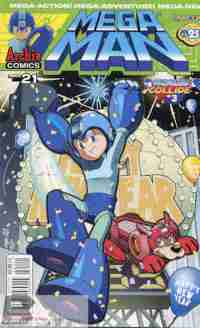 It’s New Years and Xander plans to disrupt the event since it’s this year’s guest of honor is Mega Man. Of course, his plan will lead to a lot of people being hurt. Rock, Rush, and Detectives Stern & Krantz must take down Xander and his two remaining Emerald Spears operatives before that happens.

What they got right: We actually have names and backstory for the two Spears who escaped the last time they showed up. It’s the bare minimum but they’ll probably be back so Flynn has something to build on.  As a stand-alone tale this was well done and full-length rather than a shorter story and a back-up like previous stand alone issues.

What they got wrong: It’s tough to do a New Year’s story when the year doesn’t change, as I noted in the cover’s caption gag.

Recommendation: A very good story that’s worth giving a look.

I wish more superhero comics would look at this hero as an example.