If you follow the weekly comic reviews you pretty much know what’s coming. How could I not? The idea of a human wrestling a robot is so cool I’m surprised actually wrestling in the 80s never came up with that gimmick! Sure, it’s still not the story Budinasky should have ended on and it hits all of the fighting competition cliches, but I can’t bring myself to hate a story where a man wrestles a Transformer.

The Battlefield: The Transformers #55 (Marvel; August, 1989) “The Interplanetary Wrestling Championship!”

As you may or may not recall Roadhandler, leader of the Race Car Patrol of Autobot Micromasters, was challenged to a wrestling match by Jake “The Jackhammer” Jackson. After giving Roady the quick lesson of wrestling they have their match. The match starts out the way expect a wrestling match to start…if the “babyface” in the match wasn’t a robot.

However, the match continues the way you’d expect when one of the fighters is a robot. 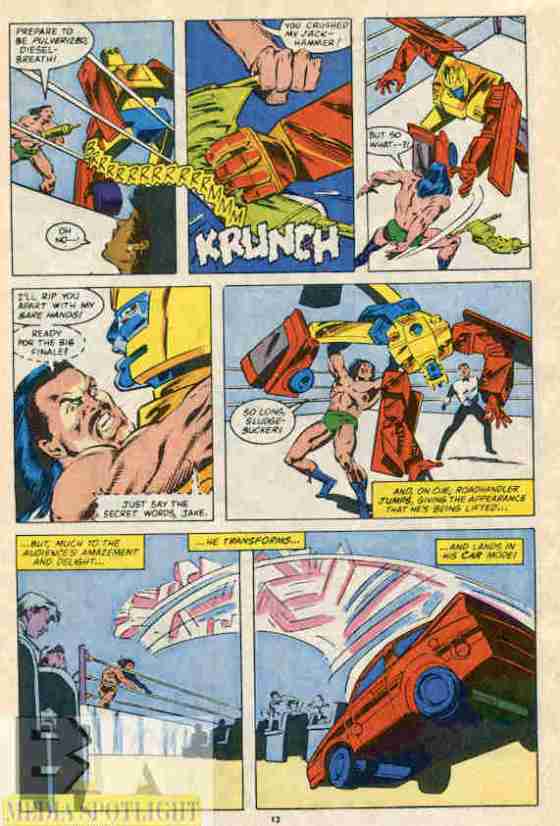 I suppose the three count is redundant at this stage.

And this is probably the least in-doubt fight I’ve posted thus far. And somehow more believable than most of the matches in Marvel’s later WCW comic.

Head to Spacebooger.com by Sunday night and vote for your favorite Friday Night Fight! (Forum membership is NOT required to vote, only to comment.) Winners of these 12 rounds head to the Prize Fight so feel free to join in. We could use the competition.