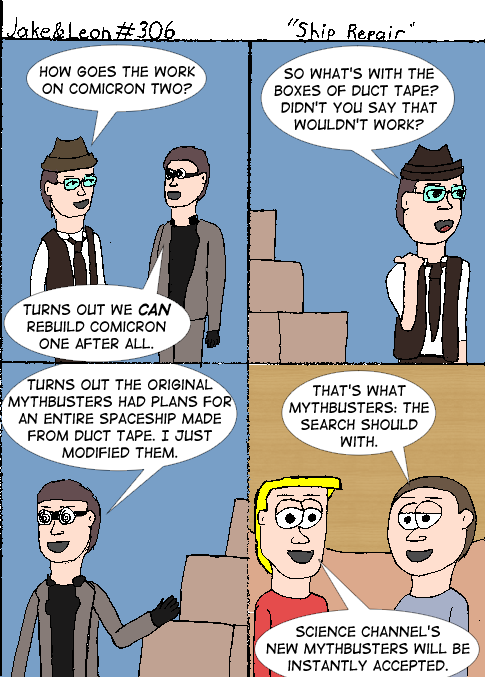 You know Adam and Jamie already have the plans.

Anybody else watching Mythbusters: The Search on Science Channel? It’s good the busting can continue, even if Adam, Jamie, Tory, Kari, and Grant aren’t there. I hope all five are the guest judges in the finale. Also…another Linkara appearance. Sick of him yet? Too bad, go watch his show. He was kind enough to point me to an episode for reference, which screwed up my intended joke, but as Ron Lucas once said (through a puppet), hey, man, learn to adjust.

I hurt my back last weekend, which means I haven’t been able to help my dad fight the Connecticut snowfall this week and that bugs me. It also means I had to delay the next phase of my comic organizing project again, and that’s getting to me as well. But at least I found something to do, and cleaned up my Rolodex.

Tomorrow we being our read-through of The 1st Phase Shifters And The Omega Capsule, and read a post-Zero Hour story that doesn’t have a connection to Batman! So we get an Adventures Of Batman & Robin issue to review because Batman will not be denied! Also we’re starting a new Marvel series, the anthology Uncanny Origins, as well as another on Friday. I only have a few issues of Oh, My Goddess but we’ll be looking over those over the next few weeks. And since I’ve already reviewed the Marvel adaptation of the animated movie, I’m going to jump to IDW’s, so go hunt down the Marvel reviews since I’ll be referencing them in the IDW adaptation reviews. IDW’s of course came out well after the movie so they aren’t working with an early draft. This should be closer to the final production. Let’s hope this is a good week.