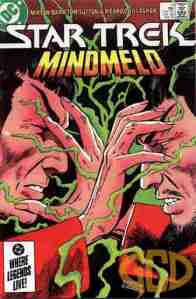 You could just ask him what he wants for dinner.

Kirk and company manages to escape from Mirror Kirk to the Mirror Enterprise, where he comes across Marlena, now working undercover for a rebel group trying to overthrow the Empire They send Styles (under protest) to warn the Federation and confronts their mirror selves in the Excelsior. Meanwhile, Mirror Spock learns that in the regular universe they completed the Genesis device and he is sent with Mirror Sulu and Mirror Chekov in the Klingon ship to retrieve the regular Spock, who is still losing his connection to himself. After punishing Mirror Sulu for firing first when it came to Spock’s parents and the elder (stun setting but still), Mirror Spock tries to mind meld with him only for Spock to fight back, trying to use him to fix his damaged mind. Back with the ships, Mirror Kirk taps into his ship’s computer and begins the self-destruction sequence. I guess he doesn’t have the same ties to his Enterprise as regular Kirk did to his.

What they got right: You couldn’t do this story without Spock versus Spock, and regular Spock using Mirror Spock to try to fix his mind is not a bad idea. The katra restoring doesn’t have to be smooth when you’re trying to fill time until Star Trek IV tells us what their actual fate is. Again, it’s tough to keep this series going under the circumstance but at least Barr is trying to make it work as best he can.

What they got wrong: I find it hard to believe that the Empire was into terraforming. I know it’s supposed to be the mirror of the main Stark Trek universe and they probably intended it for the weapon Khan and Kruge wanted to use it for but there are times they overdo it a tad. It’s not like the Tantalus Field has a counterpart in the main universe.

Recommendation: This is turning into a good story, though I still like Marvel’s version better. Spock working to alter things from within rather than do nothing (which I can’t call bad so it’s not in the “got wrong” section) works better for me, but it’s a good story nevertheless. Thus far worth looking into.