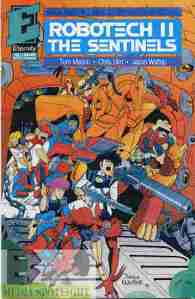 L-Ron insists that (for lack of a more accurate description since the word for it has no translation) the stars are not ready for a full invasion and that a scouting party would be better. Rick is more worries about the element of surprise and nobody else is in favor of a drone party so Rick eventually compromises with a small scouting party consisting of himself, L-Ron, Kami, Gnea, Bela (who insists on bringing Halidare because a robo-pegasus is very stealthy…somehow), Jack, Karen, and Rem. Bela lets Rem know she’s not happy about him being there. Meanwhile Crysta is having some kind of vision but doesn’t want to tell the others for fear they might make things worse trying to avoid it. On the planet Rem and Gnea are left with the communication equipment (much to Rem’s fear) as the others begin their recon.

What they got right: Good character moments all around. Jack and Karen are still amusing (as is that poor worker…I hope he gets to do something heroic and awesome before the series prematurely ends). While I personally don’t like the way the Praxians treat Rem it makes sense in-world so I can’t call that a negative. This is going to come out wrong so hear me out. I do like that Rick is able to stand up to Bela and get her to back down and follow his orders. The Praxians are an amazon race and they’re as used to men giving orders as men are taking orders from women in a patriarchal warrior society, so if the situation was reversed I say the same thing. And Rick does agree to follow her orders if she’s in charge of a mission. It’s more about these various groups learning to work together and in this case Rick is in the right, though I suspect if he’s in the wrong the story will reflect that when the time comes.

What they got wrong: Is Rick oblivious to the Praxians’ hatred, deserved or not, of Rem and the other Tirolians? Leaving him alone with Gnea may not be the best decision, even if they are the security detail for this mission. At least leave someone behind to keep Gnea from beheading Rem if he coughs in the wrong way.

Recommendation: This is still a really good series. Pick it up if you can find it.